Over the years, ChutingStar Parachute Riggers have used a wide variety of seal presses. Some of these were commonly available and others were obtained with long searching, persistent inquiries and the utmost patience (it took one year to get a unique press from Germany). 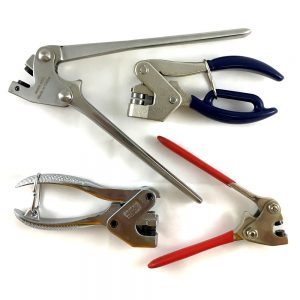 ChutingStar started selling Parachute Rigging Seal Presses to our rigging students, and then later, to riggers worldwide once we found a quality press and engraver. It must be a tough business as over the past 20 years, we've seen a few seal press manufacturers come and go.

Still, riggers today have more readily-available choices for a Seal Press than I did back in 1999 when I purchased my first seal press. And ChutingStar now carries 4 presses to choose from manufactured by two different well-established companies.

The Seal Press we've carried the longest is the HC-7. The HC-7 is fairly compact at 5" in length. The critical hinge assembly, which we've had break on other presses over time, is one of the best features of this press. The hinge is a solid and simple bolt/nut assembly that meets the lifetime demands of thousands of pack jobs for the working rigger.

The HC-7 carries the highest price tag at $95, but is well worth the money. This seal press is manufactured in the USA and has a lifetime warranty. Turnaround time is usually one week plus shipping time to you. Order yours at this link.

The Compact Seal Press comes from the same manufacturer as the HC-7, but the press is made in Taiwan, while the dies and engraving are made in the USA. This is the least expensive of all the presses at $60, but it's definitely not the lowest in quality. The chrome plating and rubber handle covers actually makes it look nicer than most of the other presses available. It doesn't carry the lifetime warranty of the HC-7, but this press should last you many years without issue.

The next seal press is probably the most common press in rigging lofts you've seen for the past 20 years. It's the 5" Bulldog Seal Press. While it is similar in looks and size to the HC-7, the main difference is in the hinge system. The hinges on the Bulldog Seal Press are assembled with hollow pins. While this factors into the relatively low price, these pins have been know to break with extensive use.

The 5" Bulldog Seal Press is $65. This press is made in China with a US engraver/distributor. Turnaround time is usually about 2 weeks. Order yours at this link.

The newest press on the parachute rigging scene is the L8 EZ Seal Press from the same manufacturer as the Bulldog. From the first look, you can clearly see the high-quality, simple and beautiful design of this seal press made of stainless steel.

The L8 EZ Seal Press is the largest and heaviest seal press we carry at 8" in length and over a pound in weight. But there is no doubt this seal press has all the leverage you'll ever need and the durability to last a lifetime.

The L8 EZ Seal Press is in the middle of the pack in price at $85 and includes a soft drawstring carry bag. Turnaround time is usually about 2 weeks. Order yours at this link.

The full selection of Parachute Rigger Seal Press Tools, Dies, Lead Seals and Safety Tie can be viewed and ordered at this link.